Alan Key to the Result at Milford 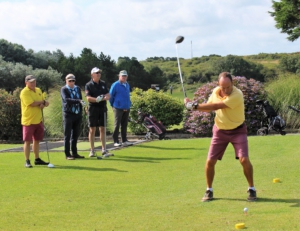 There were four Alans (three Alans and one Allen) playing in Tenby’s away fixture at Milford last week and every one of them was a winner in their four-ball match. Three were playing for Tenby and one for Milford. Had Tenby fielded all four Alans then the final result could have been a half.

Mick Whale was leading the team while his captain, Derek Cole, was sunning himself in Spain. The pressure was on. In his two previous matches in charge, Mick had led the team to victory. Could he do it again? In this match there were two tee-off starting holes, the first and the seventeenth. As the results came in Mick was in some despair as all four matches played from the first tee were won by Milford. Was there going to be a reverse of the whitewash claimed by Tenby last week. Mick was praying for at least one victory but had he used up all his goodwill by making sure that the sunny and bright with a moderate breeze?

Steve Sutcliffe had withdrawn through injury so Phil Carpenter stepped up to take his place alongside Mick and they both put up a real fight in their endeavours against Chris Harding and Mike Durward. However, playing over fairways that were covered with a green spiky surface prove just too difficult. They took it right to the end but lost out by two and one. 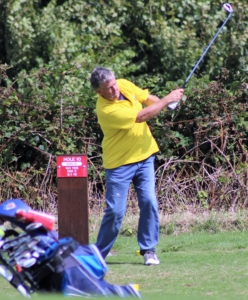 Stan Hudson had played on similar green spiky surface at Cradoc last week and fared well. Not so this week as he and his partner, Chris Beecher, were beaten by a better pair. The greens were as good as they play on at Tenby but it was the wily Owain Picton and Roy John who found the hole most often. Chris left early in case Mick called out their score of six and five down.

The first of the Alans followed them. Alan Dennison of Milford was partnered by one-handed putter, Robin Probert. They thought they were in for a tough afternoon when Des Stone and Steve Decosimo won the first hole. Des put his ball in the water on the second and then had an air shot on the third as he attempted to hit seven bells out of his ball to reach the green. Steve did not fare much better as he splayed his ball both left and right around this expansive and well-manicured course. They both struggled to find some degree of form and kept the deficit to five holes by winning three holes only, along with a couple of halves. This match finished with a friendly handshake on the fifteenth with a four and three result for Milford.

Mick Seal gave the thumbs up as he and John Richards approached the eighth green. They were one up and feeling positive. While they did well on the front nine the opposition, in the form of John Clark and Peter Taylor, took control of the back nine winning three holes on the trot. This made it more difficult for the Tenby duo to recover their equilibrium. They just never recovered and conceded the match three down with two to play. 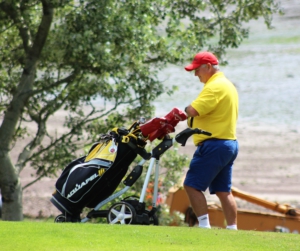 ‘We won.’ This was music to Mick’s ears as the second Allen reported in. Allen Watts, accompanied by David Rees had despatched their opposition, Adrian Dark and Dick Wooding, in this one-sided contest. Both were on form as Allen described some of his long drives. Dave provided some good support as they revelled in the glorious sunshine and soft grass (that is what that green stuff was – grass.)

Alan Barber and Peter Williams followed them in with another victory, albeit a narrow one. Peter was full of praise for Alan’s contribution as they battled it out against Gary Jelly and Peter Fisher. Peter modestly conceded that he had managed to help out on a couple of holes but that Alan’s form was the key to their one-hole victory. All hail the Alans!

Alan Sayers came in next. Surely, he couldn’t break the pattern, not with the help of Bob Forrest. This pair looked quite competent as they traversed the Milford course intent on helping the cause. Their opposition was Brian Morgan partnered by Trevor George. They took the lead and did not look back completing their objective with a five and four win. 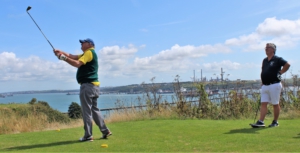 Some pride had been restored. It only needed a win from the final pair, Roger Scholfield and Ross James, for Mick to remain undefeated in his leadership. Despite the smooth and even greens the Tenby pair struggled with their putting. This resulted in the loss of too many holes. Couple this with the competence of opposition pair, Roly Council and Derek Evans, one of whom was always in with a chance on each hole. That consistency was Roger and Ross’s downfall and they ended up four and two down.

Mick’s bubble had been burst but he remains positive and still maintains that big smile.