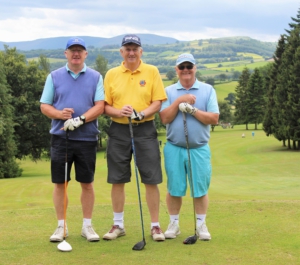 There were a few senior golfers who missed the home match against Milford last Tuesday, but it seems they were not needed. The six Tenby pairs who did play were able to complete a full house as they, albeit narrowly, managed to win all matches. This was a satisfying send off for Seniors Captain, Derek Cole, as he delegates the away match at Milford, next week, to his deputy, Mick Whale. Best of luck, Mick, although you have a good record so far in away match responsibilities. 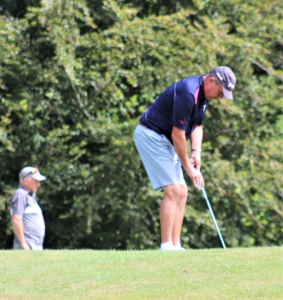 Roger Barton putting out on the back nine

The six seniors who did not put their names down for the Milford match were playing in the South Wales Seniors Claret Jug Final, held, this year, at Cradoc Golf Club, near Brecon. Wednesday morning saw most of them set off bright and early for the A40 run to the Brecon Beacons. They were hoping it would stay bright and dry while they were out on the course. Their wish was granted as they played this hilly course with a varying light to brisk breeze. A few dark clouds threatened but that was all as they chased the ball around this challenging course. 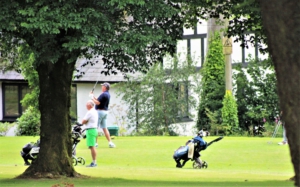 Twenty-six pairs from a total of fifteen clubs set off to overcome the challenges of sloping, tree lined fairways, water hazards and excellent greens. The three teams from Tenby were joined by three from Trefloyne and one each from Haverfordwest and Cardigan. Wenvoe, The Mond, Mountain Ash, Caerphilly, St Pierre and Ashburnham were also competing but the largest representation came from Pontypridd who fielded five pairs. 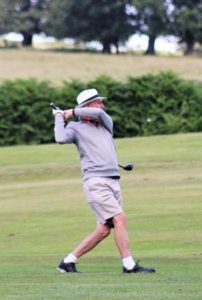 Barry Neal swinging his way up the fifteenth

The three pairs from Tenby who had qualified at Derllys Court, early in July, were Roger Barton and Mick Seal, Alan Jones and Barry Neal and Stan Hudson and Des Stone. It was a question of how they would fare among the trees and with fairways covered in grass. Quite well was the answer.

Out in twenty-one, Roger and Mick were moving along steadily and continued that form on the back nine. Their score was helped along with a four pointer on the sixteenth when Roger chipped in from off the green. A back nine of twenty-three gave them a total of forty-four points. One hole behind them all the way were Alan Jones and Barry Neal. Steady golf gave them a total of eighteen points on the front nine. Add to that the improved back nine of twenty-one points and they ended up with a final score of thirty-nine points.

Stan Hudson and Des Stone were able to score steadily on the front nine, ending up with a total of twenty-three points. Would they be able to maintain that start? They did until the final hole when they both ended up in a bunker. While Stan took two to get out his bunker and Des managed his in one but then went on to three-putt, making it their only hole with a one point score. Still, they equalled Roger and Mick’s total but with a lesser back nine.

Also in with forty-four points were the Trefloyne pair, John Voysey and Brinley Hughes. Three pairs on forty-four points, separated only by the back-nine score, headed the table and remained at the top of the standings for some time. It was surpassed, but only by one pair. Winning the Claret Jug this year, with a total of forty-six points, were Mike Tothill and Roger Jenkins from Pontypridd. Second spot went to Roger Barton and Mick Seal (Tenby) followed by Stan Hudson and Des Stone (Tenby) in third place. Alan Jones and Barry Neal’s thirty-nine points put them in fourteenth place.