The Seniors visit to South Pembs. Golf Club last Thursday was concluded with the above following a heavy defeat and a large plateful of Ham Egg and Chips.

But, first things first – the return match against Machynys played at Tenby the week before. The usual pattern of home advantage being the basis for a win in the seniors Summer calendar seems to be the norm. Tenby Seniors were able to reverse the result of their visit two weeks previously on their Llanelli counterparts as they took to the Burrows on a fine spring day.

Derek Cole chose the in-form Stan Hudson to help him overcome the challenge expected from the Machynys skipper. They reached the half way stage with a three-hole advantage. Derek weighed in with a birdie on the thirteenth to help the cause and they concluded their match on the fifteenth to establish a lead for the team.

Another pair with the same four and three result was that of Allen Watts, who had four birdies in his round, playing alongside Steve Decosimo. This was a closer encounter with both Tenby members having to pull out all the stops. Tenby did not have all the joy and, unfortunately, not all the results are to hand. However, one contested result was that involving last year’s captain, Idwal. The information received was that he was one of the two pairs to lose (at home). His memory bank suggested that it was a half but his captain said otherwise. At the end of the day Derek was able to announce that Tenby had won by five and a half to two and a half. 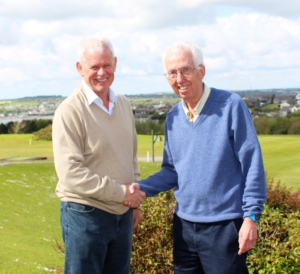 Making up for last week’s defeat Idwal was determined to show his captain that he was still good enough to be included, by working with his partner, Keith Hubbard, to return a resounding six and five victory. Not a lot to say about this result since each one claimed to be the dominant force in the result. Jeff Teague and Phil Adams were the two unfortunates on the receiving end of Idwal’s fury. They did manage to take two holes off the Tenby duo and were pleased that they stopped them achieving ‘7-UP’ status. Jeff was heard to remark that – ‘even when we played well you two played better.’

That was it – the team’s only victory – on another day that turned out to be a windy, but nevertheless, sunny afternoon. The cool breeze during the start of the day made sure everyone reached for their windcheaters as they drove into the face of the wind on the first three holes. 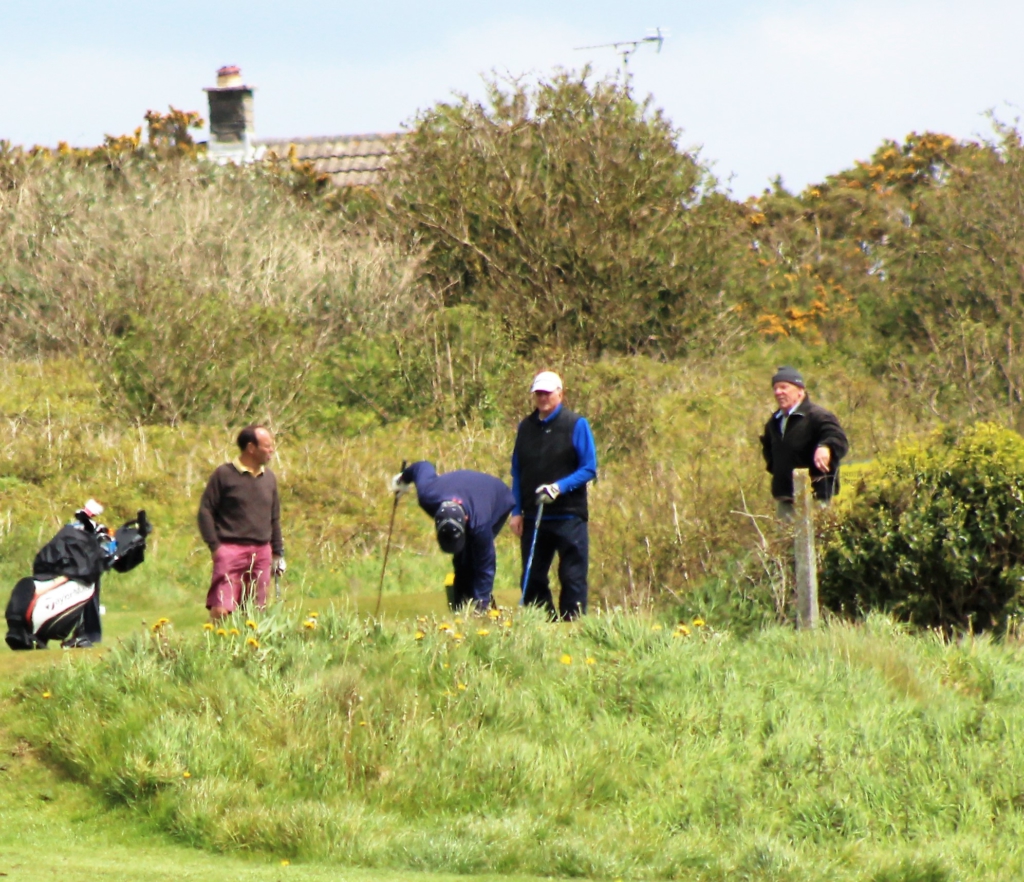 Well, not quite everyone, there was one member who couldn’t follow that practice, since he turned up in his light jumper and shorts. That was the hardy Mick Whale, who was delighted to be partnered with Stan Hudson. It did take him some time to ‘warm’ to the task as they faced Hayden Phillips and Nigel Williams. Nip and tuck all the way is the story of this match and Stan’s two on the par three fourteenth helped in their quest to overcome the opposition. They thought they were home and dry when they established a two-hole lead with two to play. They lost the last two holes ending up with a half.

That was the sum total of Tenby’s success. Even the captain couldn’t salvage a point as he and Bob Forrest battled it out against Angus Hayward and Darrell Willington. ‘They found the greens slow,’ said Bob ‘but we found them slower.’ They did keep things honest and were all square after fifteen holes. Losing the next two did not help the cause and they capitulated when three holes down with two to play.

The two Johns were out there trying their best to earn a point. That is John Richards and John Hayhoe and they were facing William Harris and Martin Lewis. Martin was astounded when he saw Mr Hayhoe take out his driver on the par three, fourteenth hole across the valley. He was further amazed when he saw John’s ball hit the front bank, rise into the air, bounce on the shoulder and land on the green. Unfortunately there was no birdie, or even a par as the South Pembs pair recovered from their shock to win by four and three. The two Johns have played together for three matches now and have yet to win a match.

Alan Jones stated that his partner, Barrie Neale, played very well in their match against Harley Chessell and Ray Young. This turned into a close match despite the fact that Alan couldn’t stop thinking about the fact that he had left his wallet at home and had to borrow some change from a fellow senior to see him through the day. They lost by two and one.

That leaves the biggest defeat on the Tenby side. Steve Decosimo and Des Stone were together again facing Bob Veal ad Mike Bradney. Steve and Des were repaying Mike and Bob for their generosity of spirit and camaraderie. They graciously shared their buggies with the Tenby pair thus enabling them to take part in the match.

Bob’s consistency, with two birdies in the five holes he won, was interspersed with a couple of holes from Mike enabling them to complete the victory by five and four. The only consolation for the Tenby pair was to win three holes and halve two.

The raffle was just edged by Tenby followed by the words of wisdom from both captains and all concerned look forward to the return match later in the season.

Footnote (or is it headnote) The observant John Hayhoe noticed a cap left hanging on a peg in the locker room. He recognized it as Des Stone’s and duly phoned him when he got home offering to retrieve and return it on Monday. What a gentleman!