Has Anyone Seen the Tommy Hutton Bowl? 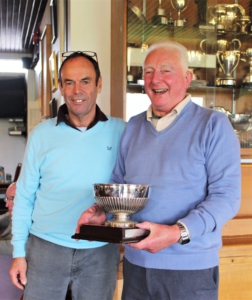 It was getting close to presentation time, following the Chapman Foursomes competition, played on Monday for the Tommy Hutton Bowl. The captain was asked if he had the trophy to present to the winner. He didn’t, so the S.O.S. went out to discover where it might be. Did last year’s winner have it and had it been returned? 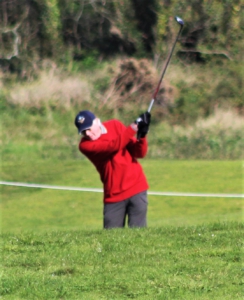 David Lamb going for the green on the fifteenth Fairway

Peter Hughes was in the last group to finish and, when asked, he denied all knowledge of winning it. Well, he was high on the winners list in the seniors last year.The search was on. Check the cabinets, check the empty rooms, check the office, the trouble was that only a few could remember what the trophy looked like.  A previous winner was asked to help in the search for the missing trophy and it was eventually located, tucked away in the bottom right hand corner of the largest cabinet in the club.

On checking previous winners there was Peter Hughes’ name boldly printed alongside his partner Neil Moffatt. Fortunately, the Bowl was in pristine condition so there was no need for a quick polish. The changing faces of the Seniors’ group is the reason for very few being able to identify the bowl.

This year’s competition had been postponed, from the original Friday date, due to squally showers, which, at the time, had members staring disappointedly out of the patio doors. This week’s weather proved much more amenable. The cold snap accentuated by the brisk breeze made sure that warm, windproof tops were the order of the day. The reward was a warmer brighter finish as members returned in anticipation of winning – well it was for a few.

So, who was going to hold the trophy for the next twelve months? Dudn’Des were early leaders in the clubhouse, but not for long. Their thirty-six points was only one ahead of David Blackmore and Barry Neale. Stephen Cole and David Lamb managed one more, before they were overtaken. 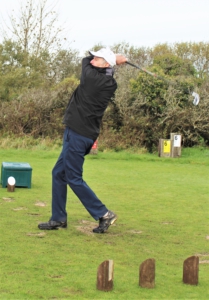 Barry Neale on the sixth tee

There were a few pairs who did not quite live up to expectations. Charlie McFee and Allen Watts slid their card into the bottom of the pack, where it stayed for some while before being ‘undertaken’. Of the eighteen pairs there were only two scoring less than thirty. Captain, Mick Whale and Idwal David only managed thirty-one, just below Roger Barton and Robin Hagley. In the next group, on thirty-four were Mess’rs Rees and Dickenson, Moffatt and Hart, and Sayers and Davies. David Rees had consolation by winning this week’s draw.

Four pairs on thirty-five and three more on thirty-six made up the middle group, which left just four at the top. In fourth place we find Stephen Cole and David Lamb on thirty- seven points while third place went to last year’s winner, Peter Hughes, partnered this year by Bart Youll, on thirty-nine points.

The runners up, Meirion Griffiths and Bob Forrest, on forty-one points, had to mark the card of this year’s winners, one of whom modestly stated, “My partner was brilliant but I was magnificent!” The ‘partner’ crept out before the photograph was taken, leaving just the ‘magnificent’ one to receive the Tommy Hutton Bowl with a score of forty-four points.

Up until a few years ago the Tommy Hutton Bowl was played for on a Friday and followed by a meal. Tommy’s widow, Marion, was always in attendance to present the trophy and enjoyed the association with the trotters who carried on the tradition of enjoying their Friday morning golf. Marion has moved to London, making her attendance almost impossible. However the bowl remains and long may it be contested. 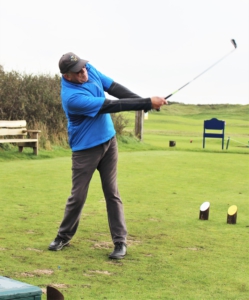