Keith and John Guaranteed Not to Lose at Cardigan 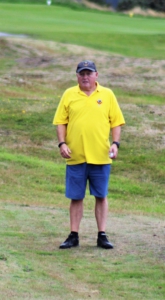 Help, I’ve got my ball but I can’t find my clubs! 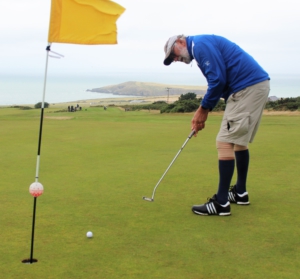 Allen Watts putts out (or misses) on the highest green, the 8th

They were the last on the team sheet but that was not the reason for the guaranteed half. Keith Hubbard and John Richards were up against John Myatt and Keith Loves so, whatever the result, Keith and John could not lose. As it turned out Mr Hubbard and Mr Richards were victorious, ending the match three and one to the good.

Carpentry being their forte they dovetailed well. They opened up a lead, which they stretched to five holes despite the struggle to see their balls merging into the mizzle. Keith parred at least four of the holes and when he did falter, John was there to pick up the pieces. They did concede a couple of holes to the home pair but were able to retain their advantage to the last. They won by three and one.

It was a case of first and last as Derek Cole returned from his holiday to help Mick Seal to a narrow win. It was a case of mutual admiration since each blamed the other for playing well. Terry Taylor, the Cardi Captain, was pleased that his playing partner, Josh Williams, used his magic putting stick to great effect in what turned out to be a very close match. On four occasions he saved his captain’s blushes by putting out from at least twenty feet. It was a nail-biter right up to the end and was concluded on the eighteenth with Derek and Mick one up.

Roger Scholfield and Steve Decosimo were travelling the heights of this picturesque course in their buggy trying to keep out of the fine drizzly rain, which forced most seniors to don their waterproof tops over the front nine. In their confrontation with Don Fletcher and Barrie Davies they found themselves five down at one stage. They did manage to recover to three down but were unable to maintain that progress. They lost one more hole ending up with a four and three defeat. 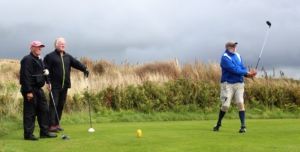 David Rees and Ross James started off in high spirits, despite the light rain. They went two down early on but a brief recovery brought them back into the match with a one-hole advantage. Ken Snelgrove and Peter Merryweather pulled away again but a committed approach saw the Tenby pair all square after sixteen holes. Having to wait on many of the holes brought the suggestion that they all walk in off the course with a half. They wish they had taken up the offer since they lost the last two holes and had to report as such to their captain.

Allen Watts and Des Stone were re-united and were up against Graham Walker and Michael Leather. They took an early lead but were brought back to all square twice within the first four holes. Despite the drizzly weather, they found enough consistency to improve their lead and increase that advantage up until the fifteenth. Des’s putt ended the match with a four and three win for the Tenby pair. 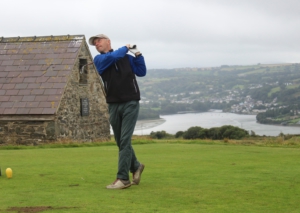 Peter Williams and Bob Forrest were engaged in a very close match against Ken Evans and Dave Rout and were unfortunate to lose out by a single hole. Also on the losing side, by a slightly bigger margin, were Alan Jones and Barry Neale. These two, competent golfers were shown how to play the course by Hayden Davies and Dick Perry and they found themselves on the wrong side of a six and five result.

Tenby were trailing by three games to two with Alan Sayers and Phil Carpenter to report in. Derek knew it was not going to be a whitewash but was delighted when Alan and Phil announced that they had managed to win their match against Bernie Legg and Vernon Lewis. Two holes up with one to play made them very happy because it meant that they did not have to compete on their last hole, which was the stroke index one hole – the fourteenth. The overall result was an honourable half.

It was not until the last minute that Derek knew that he and his selected line-up were all going to play. In his words of wisdom, after an excellent meal, he thanked Terry Taylor for the efforts made to ensure that all eight pairs were matched up.