Octogenarian Wins the Day Despite The Rain 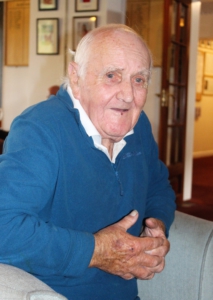 Ron Murphy relaxing after his efforts on the links

Ron Murphy was at hand and willing to help the cause when Tenby played Trefloyne on Tuesday. He partnered Steve Decosimo in this local derby as they lined up against the long hitting, Rob Nixon and Colin Rowe. With a combined age of 165 yrs. Ron and Steve were the most senior of all the groups battling for supremacy. Ron normally plays off a thirty-three handicap, but that was reduced to a maximum twenty-eight for this match.

Undeterred he and Steve set about their task and opened up an early lead. They must have gelled well, with Ron showing that he has not lost his touch, particularly around the greens, since they were able to maintain and even increase a lead as they demonstrated their skills over this links course. Try as they might Rob and Colin were unable to make any inroads and had to concede to the two veterans with four holes left to play.

Derek had abdicated his responsibility this week hoping that Mick Whale would be able to respond to the challenge of a local derby. With trepidation, Mick stepped onto the first tee, an anxious look on his face as he shook hands with the Trefloyne captain, John Voysey and partner, Brinley Hughes. John drove off but winced as he completed his drive. He had tweaked something in his shoulder causing great discomfort. Fortunately, he found some magic white powder in his bag and hoped that it would help ease the pain. It was so effective that by the time they had reached the fifth tee he had, seemingly, fully recovered. He was on such a high that he scored an eagle two on the fifth hole declaring that it was almost a one.

Peter Williams tees off on the 11th watched by the opposition

Mick was not worried. He had seen the start made by his partner, Keith Hubbard, and had every faith that they could do well against the visitors. Keith was on fire, determined to make up for his indifferent score in the Mel Neale competition on Sunday. His putter was red hot as he putted in from off the green on the eleventh. Keith and Mick played well as a pair and were able to maintain a leading edge as they progressed around the course. It was a close match, nonetheless, and they reached the seventeenth all square. A winning putt for the Tenby pair enabled them to set the standard for the team.

David Rees and Mick Seal were close behind the front pair and they and the Trefloyne duo of Simon Sweet and Mike Allen were nip and tuck all the way. David and Mick were one up at the turn. It was still all to play for. The back nine was also closely contested and again they were just one up after sixteen. All square going down the eighteenth, how would it play out? Mike found himself in the rough and escaped with a good shot, finding the green, close to the pin, with his next. Mick was on the green, but with a longish putt. A half was offered and all readily accepted. It was then Mick Seal stepped up and putted out. It was still a half. 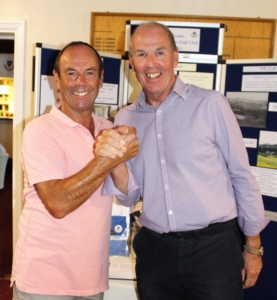 Yet another close match was played out with Idwal David and Phil Carpenter trying to ward off the challenge from Alun Williams and Pat Casement. So close was it that they reached the sixteenth tee all square. They won this and moved on to the seventeenth. They were fortunate to win this as well and walked in with a two and one victory.

Graham Longster walked in off the eighteen declaring, ‘That’s the best I have played the Tenby course.’ He was supported by Derek Jones, who played all the fairways – just not in the right order! The first two holes were halved, before Graham and Derek opened up a lead. While there were many more holes halved Grahams ‘birdie fest’ on the eighth, ninth and fifteenth (hole 9A) enabled the visitors to forge ahead and win by three and two.

Peter Williams and Charlie McFee managed a convincing win over the two other Grahams, Harrison and Willcocks. Mr Harrison had a second attempt at extricating himself from the bunker on the fourteenth, close to the green. He suffered the same fate as he had a few years previously ending up with no score. Charlie gave Peter’s efforts a boost when he had a run of pars and birdies on the back nine. It was enough to establish their hold over this match as they finished on the fourteenth already five up.

Allen Watts and Des Stone had their work cut out as they faced Dennis Holloway and John Hammond. Both Trefloyne members were hitting good straight balls down each fairway, following them up with good approach shots. Allen was able to match them, with the occasional good drive from his partner. Allen’s consistency, with mostly pars and birdies, meant that he was only one shot over his six handicap after nine holes. It also helped them establish a two-hole lead. Dennis and John hit back winning hole 9A and ten while the next two were halved. 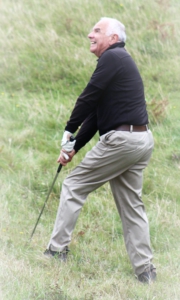 Dennis Holloway not sure where his ball went on the ninth. He never found it

Des’s contribution was to score a birdie three on the thirteenth and an eagle three on the fourteenth. Equality was maintained, until they won the seventeenth to claim the game by three and two.

There was a long wait for the last four-ball to complete their match. Roger Scholfield had been paired with Adrian Palmer and they faced Brian Miller and Steve Jones. Everyone had finished eating by the time this group entered the arena of the final hole. The rain had become more intense and Roger had left the group after thirteen holes, not feeling too well. Unfortunately, at that point, they were three holes down and Adrian had to compete two against one to finish the match. He played so well that he was all square starting the eighteenth. All three arrived on the green safely but it was a six-foot putt that went against Adrian who, consequently, lost by one-hole.

Both captains were full of praise for each other and welcomed the friendly rivalry between the two clubs. The final result, on this occasion, was a win for Tenby by five and a half to two and a half.