Oh What a Beautiful Morning – 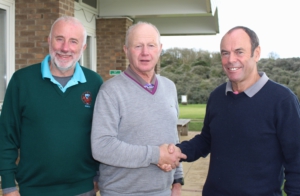 Oh What a Beautiful Morning –

Oh what a beautiful day

Yes, we had a superb outing

With no wind to hinder our play.

The seniors couldn’t wait to get out on Tuesday morning. The early sun was shining before some clouds drifted in. The air was clear and the temperature mild. What could spoil a great day of golf? – well the wet rough for one (ask John Richards), and the new drop-zones (for those who landed on the fairways) for another. One or two found it difficult to adjust to the speed of the greens, mainly due to the dew. 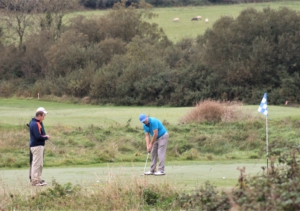 New member, Glenn Smith putts out on the seventeenth watched by Bob Forrest and David Henry

Despite those excuses, there were some good scores in, with nineteen out of the thirty-eight starters scoring thirty or more points. The top dogs scored forty-one points, to equal last week’s winner. One member of the fraternity ended up with a nil return. Two points after five holes was enough to send him into a spin so he decided to call it a day.

Another member, Barry Neale, turned up on the fifteenth tee to join his group and played a couple of holes before he realised that he had not registered in the Pro-shop and did not have a card. Fortunately, he was able to avoid disqualification by popping in to the Pro-shop as they completed the eighteenth to pay his dues. He went on to reach a score of twenty-five.

Brian Waters happily drove his buggy up the third fairway, totally unaware that his bag of clubs had fallen off behind him. He, and Charlie, had to retrace their steps and make sure that the strap was securely in place to ensure they continued unhindered. 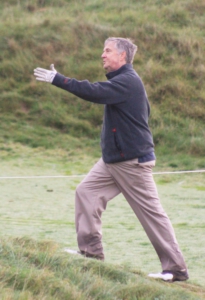 ‘Let me shake your hand’, Alan Sayers to Rod Clarke on the 11th

Congratulations to our captain, Mick Whale. He has improved the weather conditions after a shaky start and he has also, made sure that he has been on the tee in good time over the last two weeks.

Dudley Williams was delighted, last week, to score a two, on the twelfth, giving him five points. This week he reversed that by scoring a five giving him two points.

Along with the one nil return there were four seniors who scored less than twenty this week, which, given the conditions, was quite surprising. Joining Barry Neale on twenty-five was Brian Waters while Mick Whale, Des Stone, Meurig and Dudley were close behind.

Ross James was delighted to score one point on the eighteenth. It gave him a score of thirty, which was only one behind Stan Hudson and Hywel Probert. Bill Davies was on his own with thirty-two points, one behind a group of five on thirty- three, namely – Alan Sayers, Stephen Cole, Bob Forrest, David Henry and David Rees.

Keith Hubbard, Tony Keys and Allen Watts all managed thirty-five points but fell short of the top dogs this week. There were two on thirty-six (Roger Barton and Robin Hagley) and two on thirty-nine (Glenn Smith and Peter Hughes)

The same score of forty-one locked the top two together but Meirion Griffiths was declared the winner due to a better back nine than Idwal David. There were only two two’s this week, scored by Roger Barton and Robin Hagley, both on the seventeenth. Allen Watts’ lucky streak continues, he was the winner of this week’s draw.

Next week the seniors will play the postponed Tommy Hutton Bowl on Monday 28th Oct. 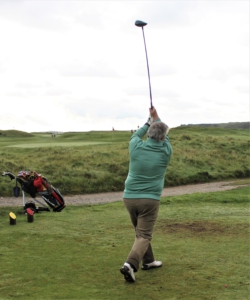