Talent on Display in Glorious Sunshine 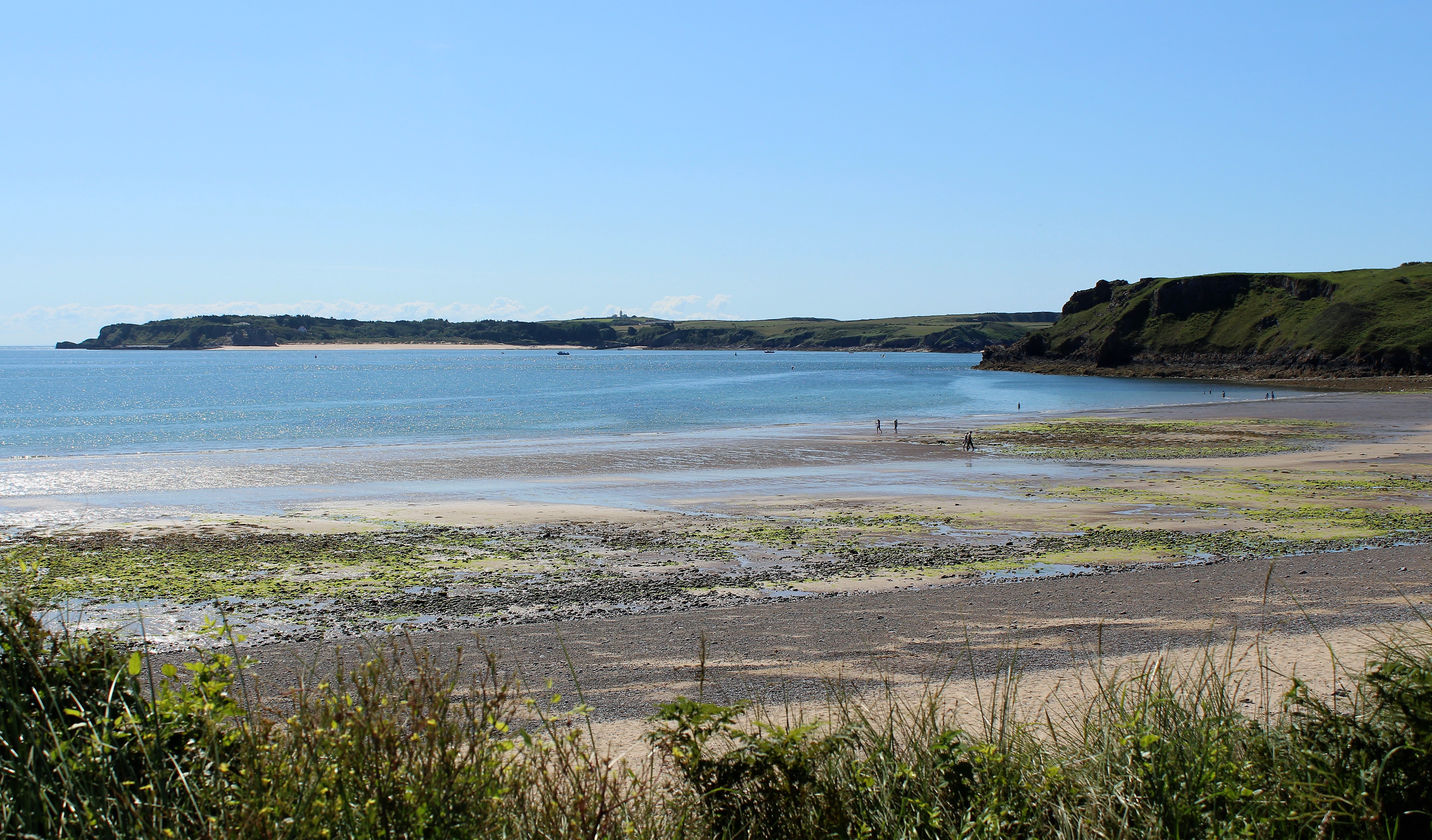 Caldey, the view we can appreciate every time we play

There was a distinct buzz around the clubhouse on Tuesday as thirty-five seniors gathered in great anticipation, and glorious sunshine, to enjoy the challenge of this well recovered course. A quick look at the result sheet shows that there was one nil return and not a single senior with a score less than twenty this week. There were a couple of seniors out on the course who had not joined the competition but were just there for the joy of playing. 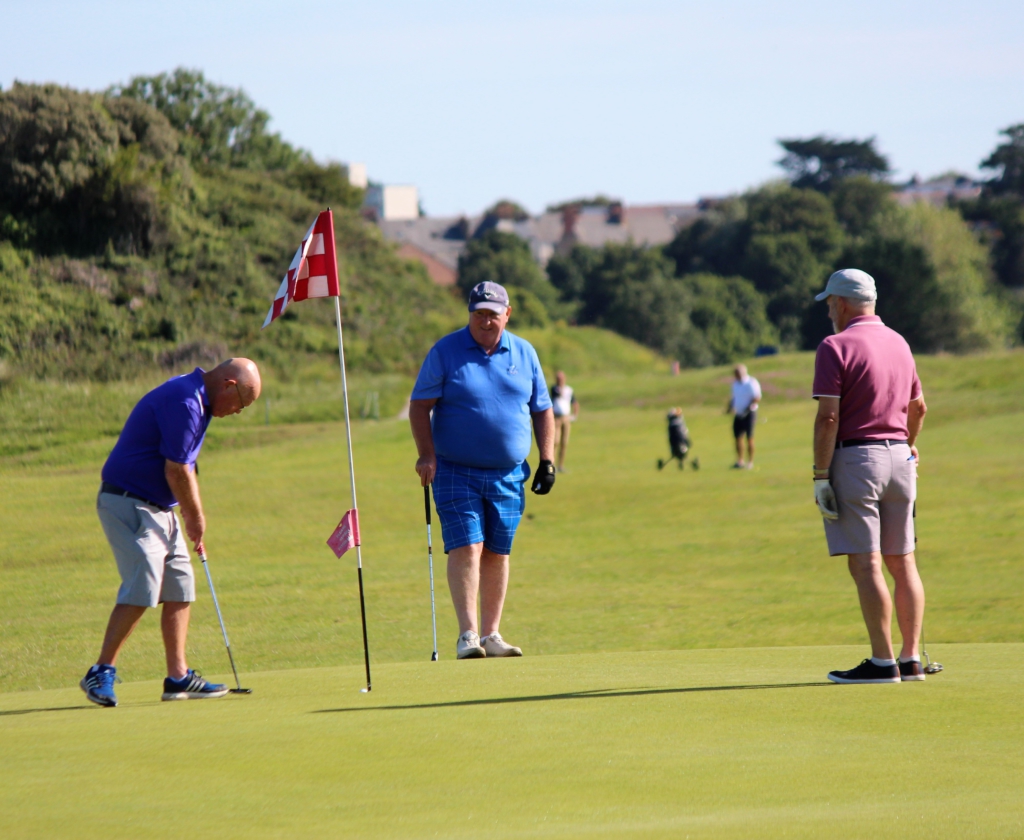 The results were a reflection of the weather, which was as benign as it could have been and the winner was back in the forties this week, albeit on his own. Twenty-six of the thirty-five starters scored thirty or more points. This left the remaining eight in the twenties, the lowest being twenty-four.

Charlie Dredge was on his own on twenty-nine points with David Henry and Chris Beecher close behind on twenty-eight. There was a pack of seven just scraping into the thirty scoreline and that included our captain, Mick Whale, along with Bill Davies and David Rees. Bypassing the group of four on thirty-one was the larger group of six seniors all on thirty-two points. That included John Barrett, Brent Davies, Gareth Davies, David Blackmore, Barry Neale and Allen Watts. 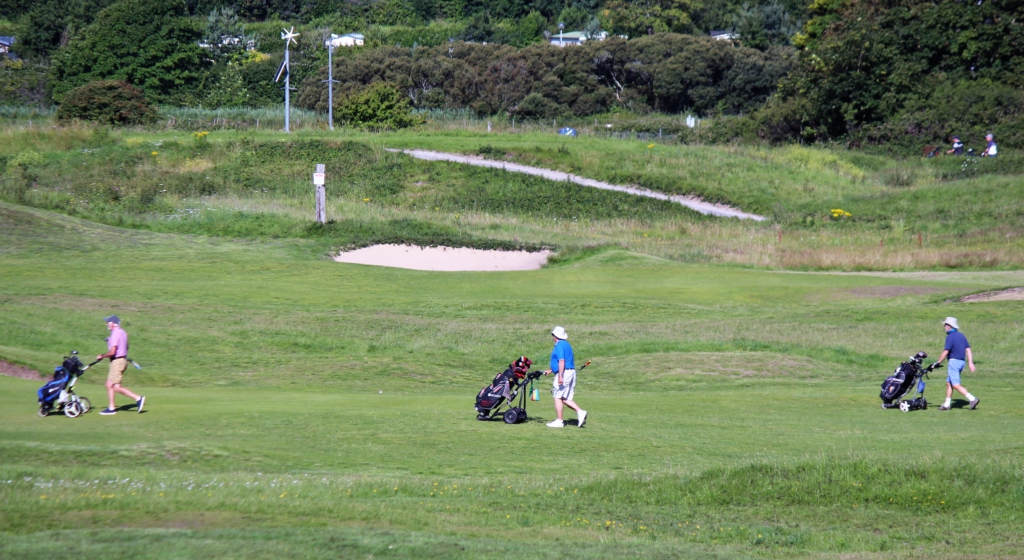 Gareth Davies, Keith Hubbard and Chris Lawrence observing a safe distance as they walk down the second fairway

That just leaves this week’s winner and runner up. Stan Hudson continued his run of good form reaching the heady score of thirty-nine points. It was a good score but not good enough to take the winners podium. Ross James walked off the course last week with a back problem and returned this week with a score of forty-one points. Despite the superb conditions, no one could match that total. They all tried, some losing balls in the heavy rough and others struggling with the faster greens.

In all the efforts there were six players who achieved a two this week. Phil Carpenter, Stan Hudson and Barry Neale achieved theirs on the sixth while Idwal David, John Richards and John Stevenson earned theirs on the seventeenth. 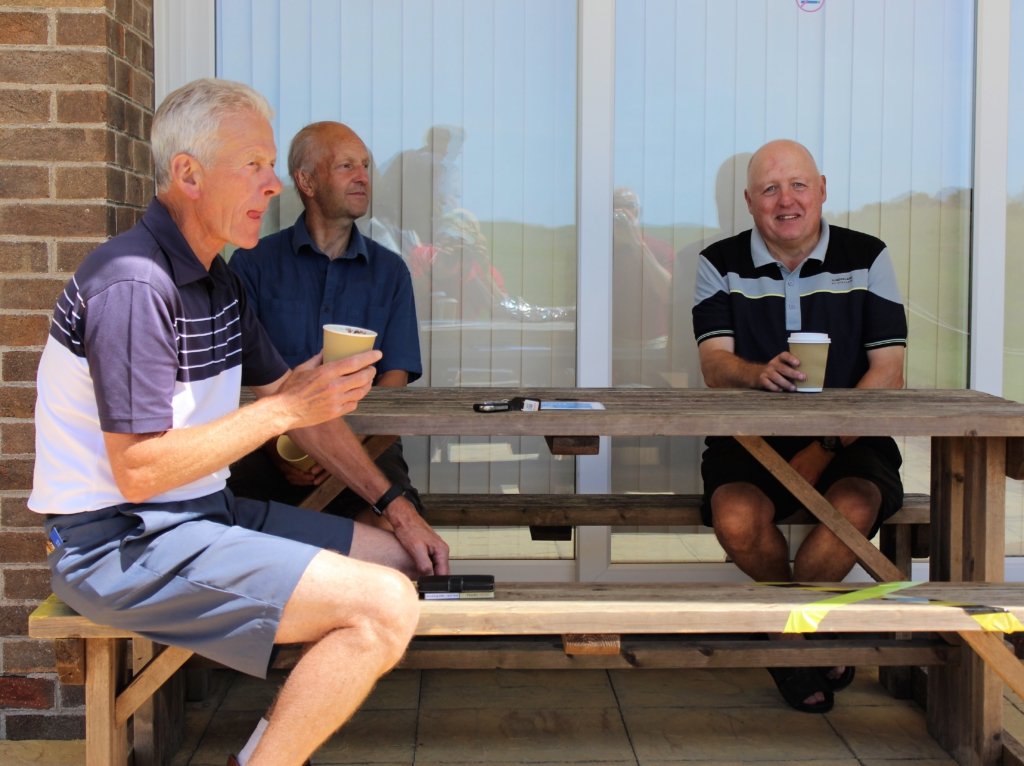 A time for reflection, Adrian, Ross and Phil relax with a coffee after the round

In between the seniors’ Tuesday competitions the first round in the Summer Knock Out competition has been taking place with Phil Carpenter beating Bart Youll. He will now play Stan Hudson in the second round.

Idwal will face Glenn Smith in the next round having beaten his playing partner, Dave Henry. Glenn Smith had to overcome the challenge from David Blackmore to get there. Steve Sutcliffe is through, he beat Derek Cole while Mick Seal put an end to Allen Watts hopes of any glory in their first round match. David Rees welcomed Brian Jones back to the club and then made sure that he did not progress any further in this competition. He now meets Des Stone in the next round.